A year ago, I experienced the collector’s thrill of a lifetime.  I started collecting documents related to Yale history in 2003 (around my tenth year reunion).  I’ve been fascinated with the Yale campus, architecture, traditions, societies, and college life since my first day of freshman year.  My original intention was to collect Yale-related historical documents — the interest grew to include Colonial, Civil War and US Presidential history — between my 10th and 25th reunions. I planned to gather documents “in secret” and make a single donation in honor of the 25th reunion.

As I soon discovered, the research time needed to curate each item in preparation for donation increased exponentially in the passing years.  As Google increased its offerings on Google Books, the opportunity to research and learn about the many authors and subjects in my collection became an obsession in itself.  I also realized that historical documents are best enjoyed when available to other researchers and scholars.  By 2008, I decided to donate my entire collection to Yale in honor of my 15th reunion.  After suffering a month of donor’s remorse, I enjoyed seeing documents available for research.  I continued to assemble documents and made additional donations during numerous reunions and events (in honor of the 15th, 20th, and 25th reunions, the 2011 conclusion of the Yale Tomorrow Campaign, and the 100th anniversary of Henry Roe Cloud’s (BA 1910, MA 1914) masters degree in 2014).

As part of my 25th reunion weekend, I shared my love of collecting with classmates during a Friday afternoon exhibit at the Gates Classroom, a newly renovated Manuscripts & Archives teaching space once devoted to the Gutenberg Bible.  The Gates Classroom is adjacent to the L&B rooms in Yale’s Sterling Library.  The first YouTube video includes a 12 minute impromptu overview with collection highlights from the May 2018 exhibit. (My college roommate & class treasurer recorded the speech with my iPhone and eventually gave me the hook!)

In the second video, I mention a 25th reunion gift to the Beinecke Library.  During the appraisal process, my appraiser discovered a rare manuscript leaf in the hand of famed author Frank Norris.  The Frank Norris and Conrad Richter letters from the Frederic Taber Cooper collection were displayed at the Beinecke Library throughout the 2018 reunion weekend. 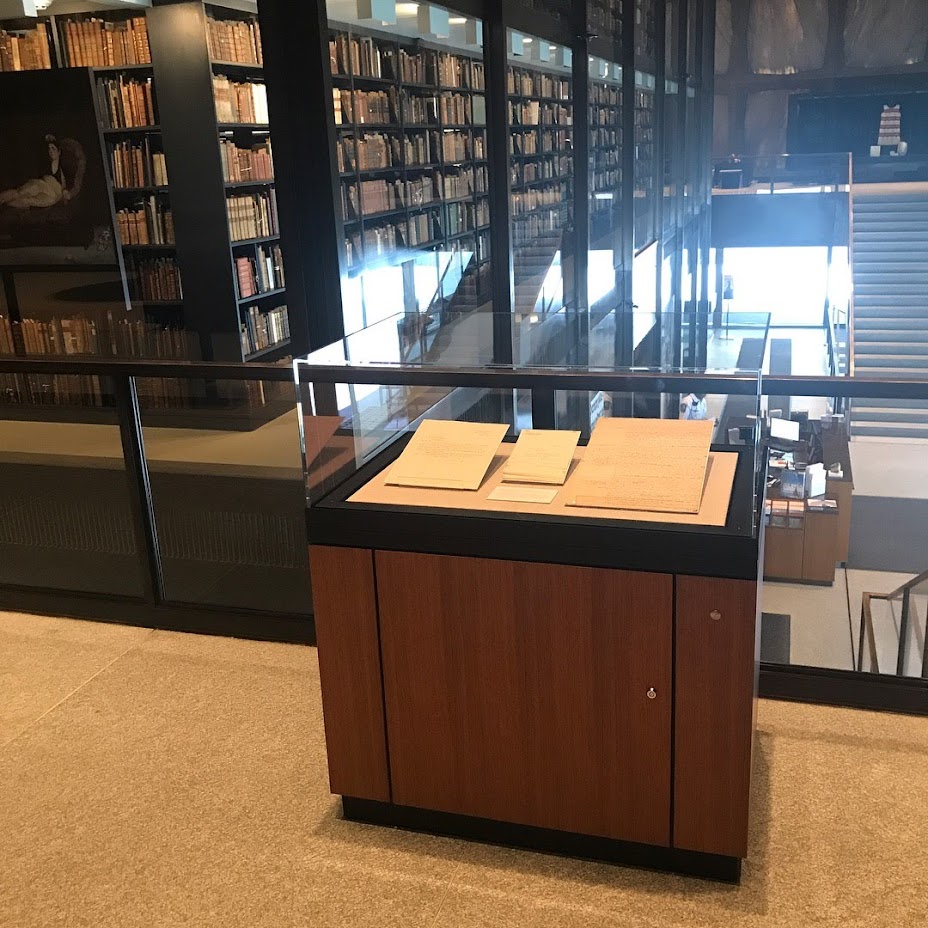 After the Gates Classroom exhibit, many classmates approached me in appreciation of the opportunity to see the documents.  One classmate told me about his brother who collects Harvard memorabilia.  We’ve probably been rival bidders at many an auction! 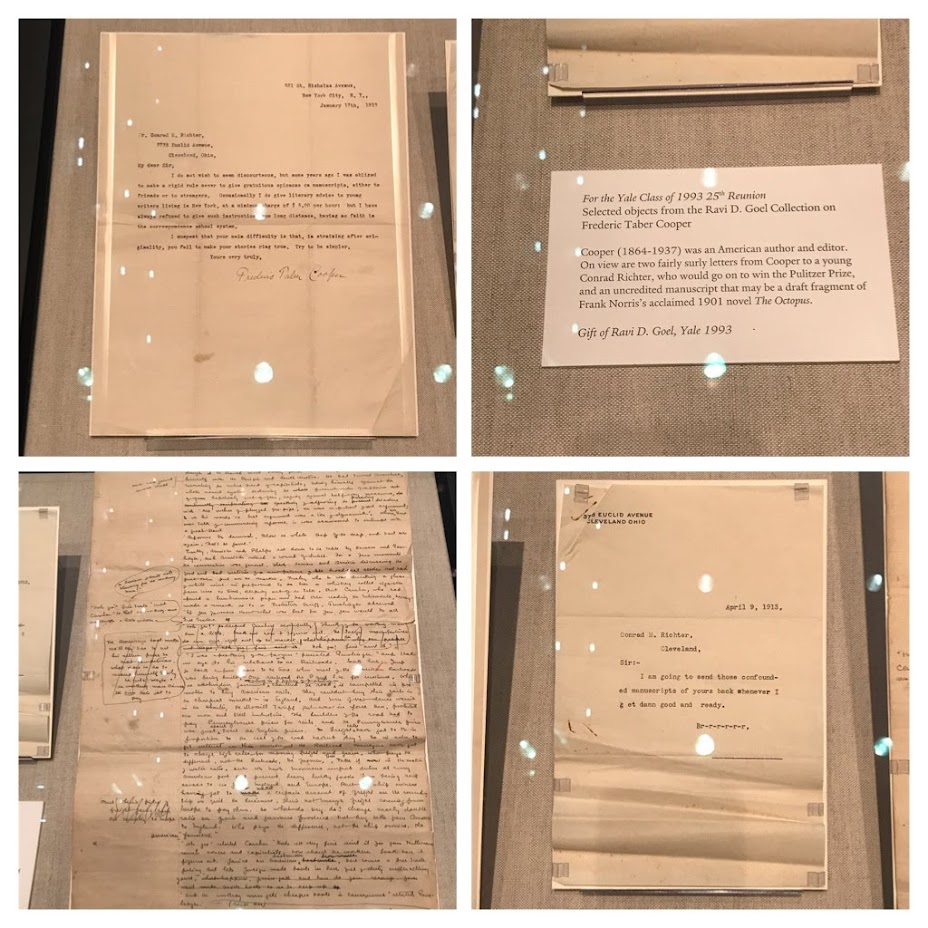 Classmates also spoke about their own collecting interests, which led to many positive interactions.  And the Yale Library, Development Office, and University friends were most gracious to attend late on a Friday holiday afternoon. 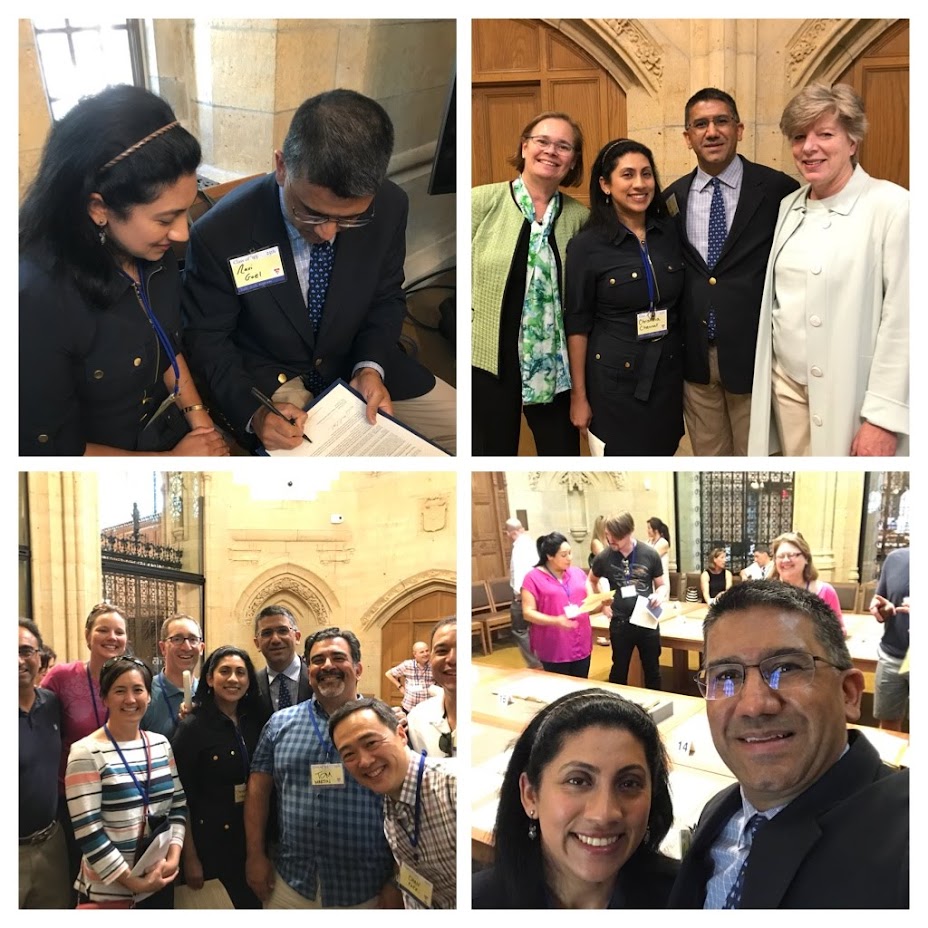 For me, the Gates Classroom exhibit was the highlight of many years of the “wonderful illness” of collecting.  Very much appreciate the class, reunion leaders, and University’s graciousness.

Below is an inventory of items which were on display.  With thanks to former Head of Collections Bill Massa who prepared this inventory.  I also funded the digitization of my collection which is available on the Yale Library Digital Collections. 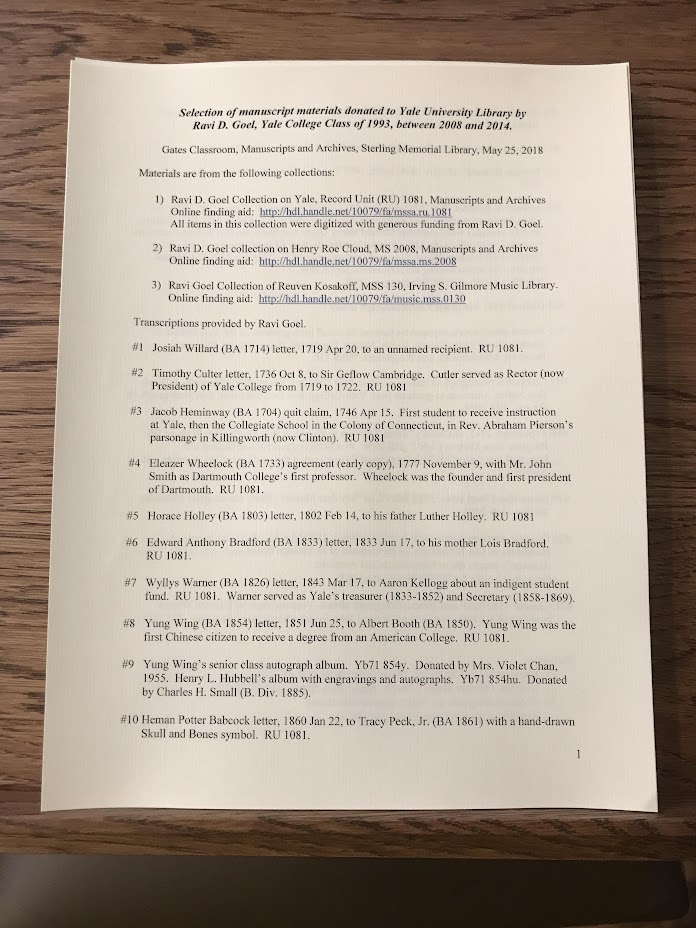 Selection of manuscript materials donated to Yale University Library by 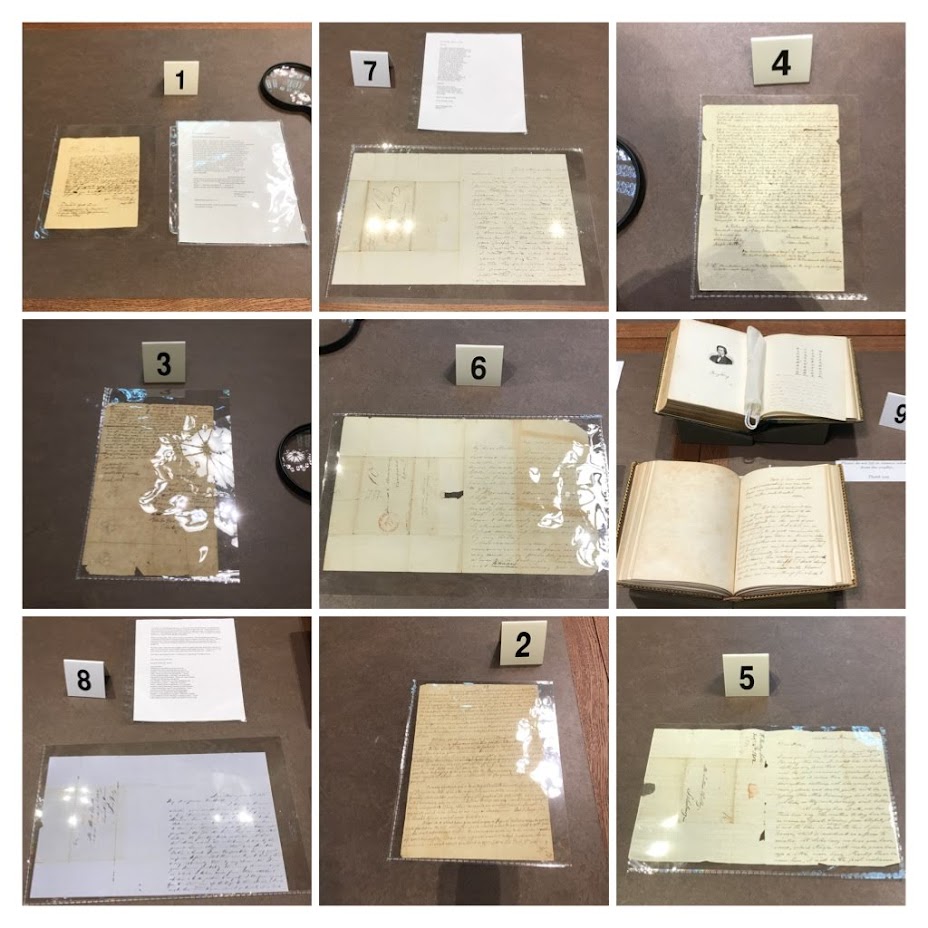 #1   Josiah Willard (BA 1714) letter, 1719 Apr 20, to an unnamed recipient.  RU 1081. (** Willard was named one of Yale’s 30 most prominent graduates at Yale’s 300th Anniversary by the Yale Alumni Magazine in 2001 (one per decade which includes Princeton founder Jonathan Dickinson, Noah Webster of Webster Dictionary, US Presidents George HW Bush, WH Taft, and Bill Clinton among many).  Willard, then a 27 year old preacher, was captured during a turkey-expedition and skinned by Indians in 1723.  This is the only Willard letter I’ve been able to locate.)

#2   Timothy Cutler letter, 1736 Oct 8, to Sir Geflow Cambridge.  Cutler served as Rector (now President) of Yale College from 1719 to 1722.  RU 1081 (** The son-in-law of Yale’s 2nd Rector, 3rd Rector Timothy Cutler (Harvard 1701) was dismissed by a vote of Yale’s Trustees in 1722 after giving an Anglican blessing.  The details of this 1736 letter are extraordinary.  Mentions Maderia wine, the comments of Sir Isaac Newton, and procurement of books from a fellow at Eton College.  Also mentions Harvard, Cambridge, Oxford, London, many Cambridge professors and religious struggles in New England.)

#3   Jacob Heminway (BA 1704) quit claim, 1746 Apr 15.  First student to receive instruction at Yale, then the Collegiate School in the Colony of Connecticut, in Rev. Abraham Pierson’s parsonage in Killingworth (now Clinton).  RU 1081 (** This is only the 2nd known signature of Yale’s First Student that I’ve been able to find.  The other is at the Beinecke Library. See also Judith Ann Schiff’s superb profile of “Yale’s First Student” in the Yale Alumni Magazine (2004).)

#4   Eleazer Wheelock (BA 1733) agreement (early copy), 1777 November 9, with Mr. John Smith as Dartmouth College’s first professor.  Wheelock was the founder and first president of Dartmouth.  RU 1081. (** As I mention in the video, Dartmouth curators are unable to locate the original copy of the contract between Dartmouth and their First Professor.  My “Copy from the Original” may well be the only one which survives.)

#5   Horace Holley (BA 1803) letter, 1802 Feb 14, to his father Luther Holley.  RU 1081 (** Holley was an educational pioneer.  As a Yale student, he writes passionately about the Judiciary Act, Constitution, and future of the young United States.  My Holley letters have been quoted in James P Cousin’s Horace Holley (2016) biography.  And a Yale senior essay!)

#6   Edward Anthony Bradford (BA 1833) letter, 1833 Jun 17, to his mother Lois Bradford. RU 1081. (** I love this letter.  Members of this Yale class, which include William Russell and Alphonso Taft, founded Skull & Bones.  Salutatorian EA Bradford writes to his mother about 7th US President Andrew Jackson’s Yale visit. He states, “Jackson left town this morning for Hartford. He arrived here Saturday afternoon from New York + remained over Sunday, thus giving me a full opportunity to inspect him.  He was attended by Mr. Van Buren (VP) … (NY Governor) + other distinguished characters.” ) #11 John Jacob Edic (BA1864) letter, 1861 Feb 2, to his brother.  Makes a brief mention of secession by Georgia.  RU 1081. (** Thomas Carolin Clay (1841-1897) is the student who left Yale.  He enlisted as a Private in the Liberty Independent Troop in 1862, which became part of Company G, 5th GA Regt. of Cavalry.  This letter is also quoted in a Yale senior essay which includes many more details of Clay’s life.  I forgot to mention that we were standing in Yale’s Sterling Library, named for Yale’s greatest philanthropist John W. Sterling & Clay’s classmate in the Yale Class of 1864.).

#12 Bound volume with a series of letters about Skull and Bones, Delegation of 1874.  RU 1081. (** My biggest regret from donating historical documents to Yale!  I wish I had kept for many more years and researched each item more thoroughly.  The letters include “Yours in 322 … Temple Fund … Bones,” and many key details of Skull & Bones history).

#13 William Howard Taft (BA 1878) letter, 1898 Dec 18, to Frederick B. Percy (BA 1877). RU 1081.  (The future 27th US President, then writing on US Court of Appeals stationery, laments being unable to attend a Yale alumni gathering in Boston.  Taft writes, “I do not doubt that night under the eaves of her ancient evening, Yale’s spirit burns brightly in the breasts of her sons …”  This handwritten letter is signed, “Yours in the Bones,” a detail missed by the auction house).

#17 Composite photograph of members of the Yale College Class of 1910.  Henry Roe Cloud, first Native American to graduate from Yale College is in the center row, first photograph on the left.  MS 2008.

#18 Typescript, 1915, of Cloud’s “From Wigwam to Pulpit:  A Red Man’s Own Story of His Progress from Dark to Light.”  MS 2008. See also Roe family papers at Manuscripts and Archives. (** This essay defined Cloud for generations. His 1950 NY Times obituary paraphrases the 1915 essay’s first sentence, “Dr. Henry Roe Cloud, a Yale graduate of 1910, who was born in a wigwam on the banks of the Missouri River …”  There is a Yale senior essay waiting to be told just from this manuscript.).

#19 Henry Roe Cloud letter, 1938 Feb 14, to “My dear Marion”, likely his daughter Elizabeth Marion.  MS 2008. (** See also a Yale Manuscripts & Archives blog post on this remarkable letter: Party Diplomacy: The Ravi D. Goel Collection on Henry Roe Cloud.  Cloud writes in detail about his travels in the snow to a lavish embassy party hosted by his Yale 1910 classmate Wang Zhengting, Chinese Ambassador to the US.  Of note is that the Yale 1910 class includes Robert A. Taft, who may have been instrumental in Cloud’s leading a Winnebago delegation meeting with 27th President Taft in 1912.  “Taft was a Yale alumnus and his son had been Roe Cloud’s classmate. Roe Cloud’s Yale connections provided him with access to political power and politicians which were not available to reservation Indians.” (Native American Netroots)).

#20 Dean Gooderham Acheson (BA 1915), address, 1962 Mar 31, “Real and Imagined Handicaps of Our Democracy in the Conduct of Its Foreign Relations.”  MS 2008. See also Dean Acheson’s papers at Manuscripts and Archives.

#21 Class of 1966 Skull and Bones photograph album.  Personal copy of Richard Warren Pershing (BA 1966), grandson of General John Joseph “Black Jack” Pershing.  Yeg2 R9x 1966 Oversize. (** See also my blog post on this item: Richard Warren Pershing.  A New York Times 2004 article explored in detail fellow Bonesman & then US Presidential candidate John Kerry’s reaction and struggles with his best friend’s (“Persh”) death.  History will judge this to be among the rarest Skull & Bones albums ever to come to private hands.  The only one I’m aware of to include a US Presidential candidate’s Bones photo in the public domain.  Through a FOIA request, a curator was unable to locate 27th President Taft’s album at the Library of Congress or in US Government holdings …  the search continues.).